HISTORY OF GOLF IN PUERTO RICO

Although golf was a popular pastime in east coast Scotland from the early 1400s, it took more than a couple of centuries before it even percolated down into sister England - and it was not until the late 1880s somewhat by accident, it found its way across the Atlantic to the United States of America.

Yet such was the game’s instant popularity by the beginning of the twentieth century there were already more golf courses in the USA than Scotland and England combined. Even more astonishingly by 1910 there were more than 2,000 places to play golf throughout America, double the entire rest of the world. The game had also started to circumnavigate the globe, to India, to Australia, New Zealand and as far south in the Americas as Argentina, Brazil and Chile. It would not take long before the Caribbean would also contract golf fever.

Earliest golf was mostly played over temporary routings, layouts often changing from one week to the next. Perhaps in the now-forgotten nineteen-twenties or earlier, golf was also played in that casual manner in Puerto Rico; but history records the first formal club on the island as the original Berwind Country Club in Sabana Llana, Río Piedras, which opened its doors in 1930. These were the days of huge sugar mills and US-mainland expatriated managers with a passion for golf quickly found funds to follow up the initial success at Berwind with construction of new nine-hole facilities at Central Aguirre and Central Guánica on the south coast, and Central Roig at Humacao.

Golf was already humming in Puerto Rico when the United States entered World War II. New or considerably beefed-up military installations required additional recreational facilities for the influx of mainlanders and before long golf courses were being built at Ramey Air Force Base [then known as Borinquen Field at Aguadilla], Henry Barracks at Cayey, Fort Buchanan and El Morro, at Fort Brooke in the Old San Juan area and Roosevelt Roads Naval Base at Ceiba.

Golf matches were also thriving, between individuals, clubs and bases, but until 1954 there was no recognized organization for structured competition or growth. Although the formation of the PRGA in that year was to have a profound effect on the next half century of golf on the island, nonetheless it was a decision taken five years earlier that was arguably even more important.

In the beginning all courses on the island had sand greens, the local technique in Puerto Rico to use beach-sand laced with coconut oil, then rolled more or less flat into a concave pie-shape. In addition, for some now-unknown reason the hole was cut to larger size than standard regulation and was normally set squarely in the middle of the sand pie. As a result putting required very little skill. All this was made even simpler because after each match caddies meticulously repaired the dirt to pristine fresh, smoothing the surface with a burlap sack strapped to a pole, much as nowadays we rake and tidy sand bunkers.

A large proportion of early golf courses in the USA also had sand “greens”, particularly in the South where it was impossible to find any variety of grass resilient to high summer heat when cut low enough for putting. But as new strains of grasses were developed, particularly a heat-resistant variant of Bermuda grass, by the end of World War II sand greens had faded into distant history on the mainland.

The original Berwind Club’s greens were entirely of sand but thanks to the foresight of one Don Fernando Zegrí, Puerto Rico’s first grass greens made their debut there in 1949. In the beginning putting on grass caused considerable rancor because the surface made scoring much more difficult. Suddenly putting was a new skill that had to be learned and mastered!

In time however, grass greens were accepted and little by little every club on the island made the switch. Because of the ideal growing climate, before very long Puerto Rico would begin to lay claim to some of the finest greens in the world and if that might have been something of an exaggeration in the early days, it is certainly true today.

During the 1950s and 1960s international-design quality golf courses began to appear in Puerto Rico. The original Berwind Country Club moved from Sabana Llana to its present location at Rio Grande. Then came the development of the Cerromar-Dorado Beach complex, designed by Robert Trent Jones, and which took over ten years to complete. George and Tom Fazio were contracted to design and build the Rio Mar Ocean course, completed in 1975. The Club Deportivo del Oeste built a sporty nine-hole course in the middle-seventies. Gary Player was brought in to design the Palmas del Mar course in Humacao. The Bahía Beach Plantation was opened in the early 1990s. In 1993 El Conquistador Resort and Country Club reopened its facilities. Greg Norman designed the exotic River course at Rio Mar, completed in 1997, the perfect complement to the Fazio’s Ocean course.

From the origins of a mainly military golfing population of no more than six hundred players, with the opening of these facilities golf in Puerto Rico boomed, and keeps on booming. Today there are twelve active golfing facilities with nineteen golf courses and close to 5,000 golfers with registered handicaps. The Puerto Rico Golf Association estimates the actual total of all golfers on the island in fact may be as high as 12,000, if non-registered players are included in the overall total. With seven new courses due to be completed during 2005 on an island that measures just one hundred miles by thirty miles, golf in Puerto Rico is probably the most accessible in the entire world – another reason why thousands of golfing tourists flock to the island each and every year.

As Puerto Rico’s golfing fame has grown so has local interest at all levels and the Puerto Rico Golf Association has been hard at work developing a network of junior tournaments to encourage up and coming talent. One graduate of these programs is tour-professional Wilfredo Morales. Morales led Puerto Rico to their best-ever finish in the Eisenhower Trophy in Chile in 1998 and he is just one example of a wealth of young talent now emerging from our island with world competition on their minds.

We’ve come a long way in seventy years and still have a long way to grow! What more appropriate way then to blend a glorious past with a dynamic future than by wishing our teams in the World Amateur Golf Championships at Rio Mar the maximum of success

The Puerto Rico Golf Association (PRGA) is the authoritative body of amateur golf in the Commonwealth of Puerto Rico. In that role, the PRGA promotes growth, preserves traditions and protects the integrity of the game, in accordance with the rules adopted by the United States Golf Association. 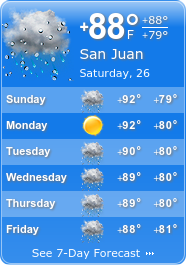